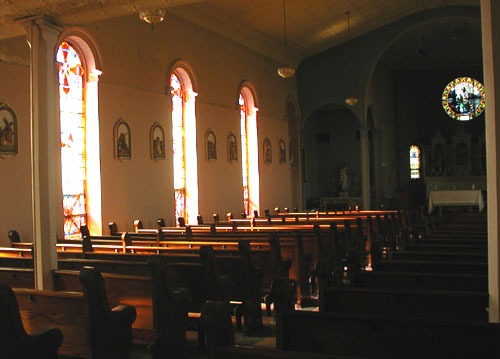 Old St Michaels Church and Cemetery are located in Greene Township, Iowa County, Iowa.This area experienced an influx of Irish-Catholic settlers after Iowa City became the new capital ofIowa on May 4, 1839. The creation of Iowa City as the capital was made possible by the Black HawkTreaty, which was signed by the government on September 21, 1832. This agreement with the Sacand Fox Indians allowed the settlement of Johnson County. At the time of the treaty the boundarylines between Johnson and Iowa counties were not clearly defined. This definition did not come untilthe survey lines of 1840. By this time, the area had already begun to be settled.Father Sullivan directed the creation of a large brick church upon the current site in 1867. The churchcontained a spacious nave. The walls of the nave were decorated with fifteen oil paintingsrepresenting the Stations of the Cross. These paintings were donated by Father Sullivan himself andwere said to cost $1,000. No church outside of Dubuque had finer paintings. These paintings are nowlost.The cost of this structure, which is the present church, was $2,000 in 1867. It was 90 feet long and 50feet wide. 15 men principally erected it, with Thomas Boyle providing most of the backing. The bricksused in the construction of the church most likely came from the Sangster Kiln at Coralville.Ebenezer Sangster's biography mentions that he built a large Catholic Church located 23 miles west ofIowa City. The fact that the church is made of brick is significant because at the time all otherchurches west of Iowa City were made of wood.